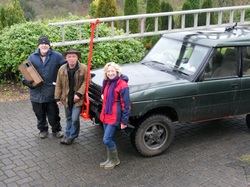 The swift box erection team in action early 2014.They and individual homeowners erected 23 new boxes. Since that date we have been adding new boxes where swifts are taking an interest in a given location. See map below. 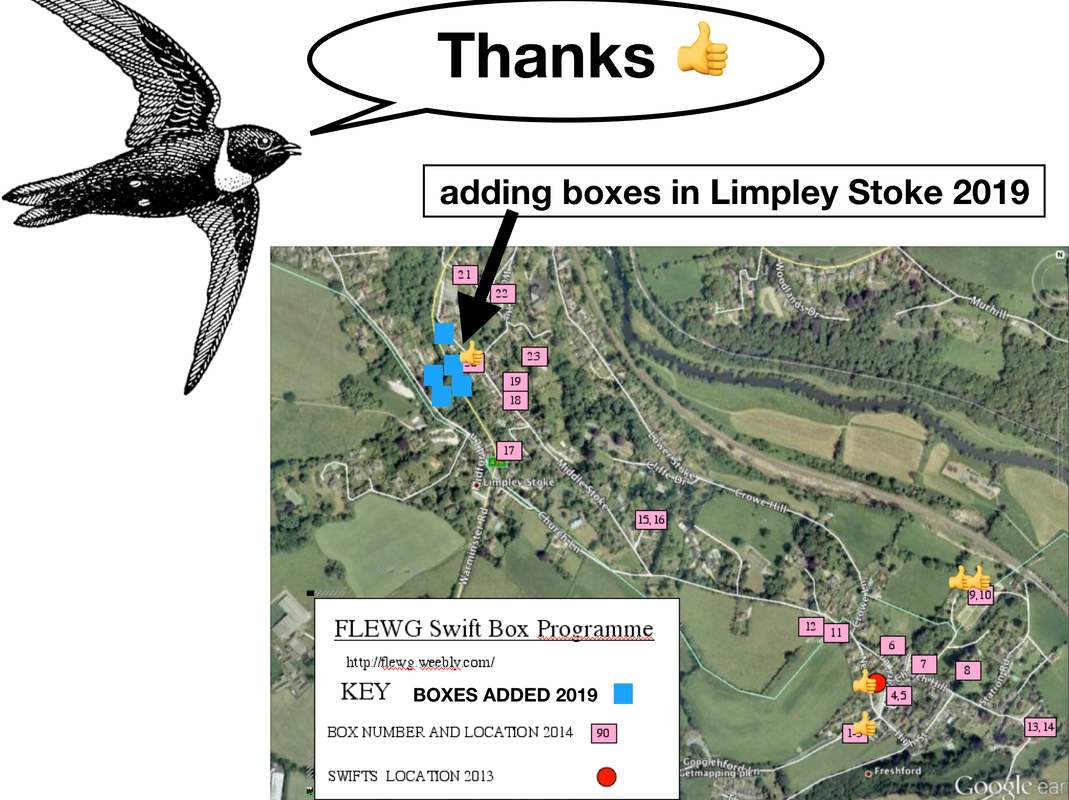 MR SWIFT HOTEL TOURS OUR SWIFT BOXES
Mark and Jane Glanville  from Bristol came and give us great advice from a home that has become a swift hotel! They spoke at our  swift supper on 31st March 2014. They thought our box locations were great and gave great advice on how to get the swift take up as quickly as possible/advice on cameras, monitoing etc etc . It is a must read for swift box hosts and particuarly helpful for those in the first stages of planning a project. There are many useful tips about box design that may well save you years of trial and error.
Mark Glanville now has his own website see www.bristolswifts.co.uk
It has good advice and links to a  swift box maker etc.

A Strategy for Recovery
Julie FitzGerald           May 2013
Swifts return to Freshford to nest each summer, but the number is decreasing each year. When I first came to live here in the 1980s the summer skies were full of swifts but now we are down to three pairs who all nest in the eaves of the same house. This decline is a national trend, but there has been considerable success in halting it and I would like us to take action now, while we still have the nucleus of a colony to build on.

Swifts are highly specialised birds who migrate north from central Africa to breed each year, following the spring abundance of airborne insects to feed themselves and their young. Apart from their few weeks nesting, they spend their entire lives airborne, each bodily function having been adapted to be possible in flight. As might be expected, their breeding needs are also specialised, more so than those of swallows and martins, who follow the same migratory path but are more adaptable.

If they have bred before, the swifts make straight for the previous year’s nest site, screaming to help each other locate the nesting colony. The site will be a ledge or crevice, which can be accessed directly from the air. This is essential because their legs are not strong enough to support their bodies for movement on a horizontal surface.  Then they make haste to rear two young. This can be a protracted business because, if insects are in short supply locally, the parents may fly hundreds of miles to find them while the chicks lie waiting in a “torpor” resuming their growth only when the food arrives. As soon as they are ready, they shuffle to the edge of their ledge, fall off and fly, forming nursery groups and feeding themselves up ready for migration back to Africa. Whilst feeding, these birds also prospect for their own future nest sites and, being colonial nesters, they are attracted by the screaming calls made by established nesting adults. None of this takes long, as the parent birds leave just as soon as they find their own nest empty. Very rarely do they attempt a second brood. Thus by the end of August, less than sixteen weeks after they arrived, they have all gone and the family’s “arrangements” for next year’s breeding programme are already made.

It is clear that this sequence is a fragile one for a variety of reasons. Local insect supplies are important, but the overwhelming disaster occurs if chosen nest sites are not available.  A bird will make frantic efforts to find a substitute but there is only a short time in which a sheltered ledge must be found near other birds and high enough to allow the swiftlets to learn to fly at the first attempt. Modern building methods and avid house alterations have blocked off almost all ideal nest crevices over the last fifty or so years. Most people have done this unwittingly, some dislike the scrabbling sounds from their attics and others regard the birds as unhygienic or just plain bad luck.  The results have been disastrous, but there are successful nest site regeneration projects in hand all over Britain which have overcome the perceived problems.  We in Freshford now have a golden opportunity to save our colony without too much effort or expense.

The dedicated organisation has a practical and fascinating website at
swift-conservation.org. One of the larger and most encouraging projects is at Fulbourn in Cambridgeshire, described in some detail on the RSPB website: http://www.rspb.org.uk/thingstodo/surveys/swifts/casestudies/fulbournswifts.aspx. My interest in the potential of a local project has been fuelled by the successes described on these sites.

My suggestions are that we:

·      Determine how many householders with tall enough houses would be prepared to erect external nest boxes, or chambers under their eaves or within their roof spaces

·      Include provision for and protection of nest sites for swifts and other vulnerable species, such as sparrows, in the Village Plan.