It is sometimes easy to forget that butterflies, bees and moths (and other polinators like wasps, beetles and flies) are some of the most important organisms on the planet. Without them, many flowering plants that we value for food, clothing, or just their beauty would go extinct. Flowering plants, otherwise known as angiosperms, usually depend upon animals for pollination so that they can produce the seeds that can then grow up to be the next generation. This co-evolution of flowering plants and their pollinators (primarily insects in the UK) occurred over hundreds of millions of years and the survival of one is dependent upon the survival of the other.

BEES
The Widlife trusts have produced  Bees Needs: pollinator advisory sheets
"Whether you have a garden, woodland or agricultural land, there's something everybody can do to help pollinators. Have a read of our information sheets for land managers" See the following link to download the guides.
http://www.wildlifetrusts.org/bees-needs/information-sheets

MOTHS
​In September 2015 we held a Moth day in Limpley Stoke hosted by the Hope Pole Inn.
On Sunday 13th September 2015 we held a Moth Day. Moths were collected in a moth trap located at the Hop Pole Inn overnight . A moth expert then showed the examples of moths collected. Over 2400 species have been recorded in the British Isles. Meeting a moth and having a lemonade or pint at our local pub turned out to be a fun lunch event for all ages. 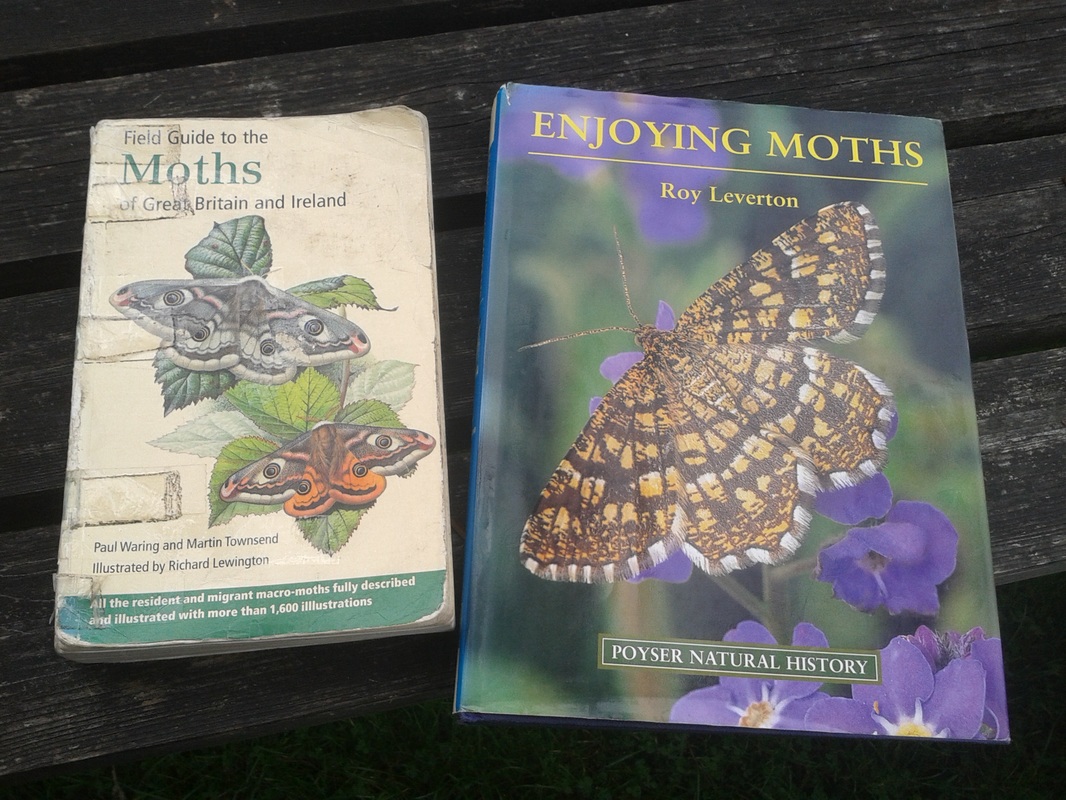 Check out  'Moth Night 2015' http://www.mothnight.info/www/ At a moth night  during July 2015 at Iford  they recorded 68 different moth species! "You can take part in Moth Night in any way you choose. This might involve running a moth-trap in your garden or in the countryside, looking for moths at your kitchen window or ...."

The Field Guide to Moths of Great Britain and Ireland (pictured above) is comprehensive if you want to check the names of moths you find. 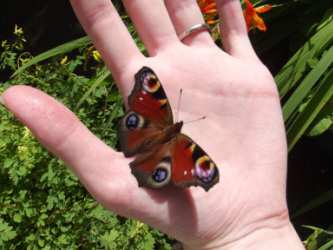 This stunning display of colour belongs to the Peacock Butterfly seen in  Limpley Stoke. They can be spotted drinking nectar (pollinating in the process) all sorts of flowers in British gardens and across the countryside. You may see less of them in areas with well-kept gardens however. Why? It is because whilst we admire their beauty, most people do not admire the plants on which they lay their eggs for their catapillars to eat: nettles! So if you like peacock butterflies be grateful of the occasional nettle sting for as long as there are nettles, hopefully there will also be peacock butterflies.

You don't know what you've got 'til it's gone! 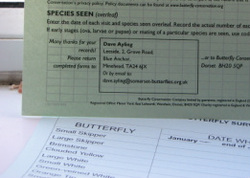 Butterfly Conservation is a registered charity dedicated to the conservation of butterflies and moths across the UK and they have a Somerset and Bristol Branch. They keep an eye on numbers and distribution of different species of butterflies making sure that not only do we know what butterflies we have, but we can also act to protect them before they are gone!

If you like butterflies, you can help: you can be a butterfly recorder! You can contact Dave Ayling to get the appropriate forms or you can visit the developing branch website committee page to take a look at their Species and recognition chart and to download recording forms.
Butterflies in the disastrous year of 2012
Hugh Wright who lived in Limpley Stoke until recently  has a particular interest in butterflies and moths and  wrote the following  article for the parish magazine.

The Big Butterfly Count , organised on a national basis by Butterfly Conservation, took place between 14th July and 5th August in 2012. Greater numbers of observers than ever took part. They counted the smallest numbers of butterflies ever. Their findings correspond with what we all feared. The weather in 2012 was a disaster. Reports for the year for Somerset produced by the local branch of Butterfly Conservation tell the same story.

When broken down into detail and over the whole year, though, much that is of interest emerges. March was warm and dry and things started well. Then the rains came.  As a result the length of time that most species were flying was longer, presumably because they were inactive on all the rainy days – they had a longer and more boring life! Individual species were first seen later in the year too, presumably for the same reason. The good news is that visits to all the sites of the county’s many  rare butterflies were nearly all positive – some were seen at all of them with numbers of the Large Blues, recently reintroduced and very rare, reported as ‘not too bad’. The really spectacular drops in numbers were among the most common species – the ones we often used to see in our gardens and in the fields nearby. Gardeners were aware that Large and Small Whites, normally a curse to the growers of brassicas were rare in 2012. So were the beautiful Brimstones that spend their long lives looking for Buckthorn for their eggs before they hibernate. As in recent years (all have been bad for butterflies) those that lay their eggs on grasses, the Meadow Browns, Ringlets, some of the Skippers, the Small Heaths and Marbled Whites fared better than most others, with quite reasonable numbers being seen locally though some later than usual. Numbers of Silver Washed Fritillaries seen in late July and August in Warleigh Woods were down, but not disastrously so.

The good news is that by late August and September Red Admirals and Small Tortoiseshells (recently rare) were about in reasonable numbers, even flying in good numbers half way through October. It was a special treat to see just one of any of the other colourful butterflies that make you rejoice at their beauty. I have never been so pleased to see a small copper – on its own in a field by the Winsley bi-pass. Holly Blues were about in small numbers there too though Common Blues did very badly everywhere. They lay their eggs mostly on Bird’s –foot-trefoil, the little yellow flower that grows in unfertilised grassland, which did badly this year. It was one of the original 18 species of British butterflies listed in 1634 by Thomas Moffet in his Insectorum Theatrum so we must hope it has the capacity to survive what we and the weather are doing to it.

In conclusion something we can all do to help. It is not only the weather/ global warming/ rain that are doing the damage. It is the mechanical cutting of hedges. This often cuts down the trees, plants and shrubs that grow in them that are a vital part of the life cycle of many butterflies and moths. A good example is the Brown Hairstreak, which has always been rare except in certain places, for example in Wales and Devon. It lays its eggs on Blackthorn which is most often found in hedges. Farmers who are aware of this leave the hedge when its eggs and caterpillars are present, the eggs from September to April, the caterpillars in May and June. When this is done the brown hairstreaks flourish.

It is not only rare species that need protection now, they all do. Many of us have hedges and our local farmers all seem to keep their hedges well shorn by machine with no thought for the damage being done to the wildlife in them. Something needs to be done before it is too late. As for the weather all we can do is hope.                    HRW January 2013
Butterfly Conservation